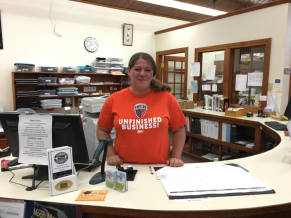 Christina is not from the village of Cambridge, but she lives in the immediate area and grew up there, too.  In between, she lived elsewhere for a while, before returning with children.  She’s an enthusiastic spokesperson for the region, though one with a window into some of the area’s hardships.

The Cambridge (NY) Public Library is chartered by the village, but receives additional funding from the Cambridge Central School district and the surrounding towns (Cambridge, White Creek, and Jackson).  It can be found toward the edge of the village in a historic building.  A plan is just getting going to enlarge the building to enhance accessibility and to enable the creation of appropriate spaces for children and groups that meet there.

Christina told me it’s “a beautiful building, but not a conducive space for the things we’re doing.”  By way of services, this includes free assistance with tax preparation and in navigating the health insurance marketplace, along with tutoring around literacy, computer technology, and GED programs.  The library also offers a meeting room for outside groups, including scouts (boy and girl), youth sports organizations, and mahjong players.  But any expansion plan, which could offer accessibility and a quiet meeting room, will have a long lead-up and may not happen until 2020/2021.

About a year ago, Christina and Mayor Bogle partnered on “Community Change Agent,” a series of “aspirational meetings” that gave local folks the opportunity to express their thoughts on areas for improvement in Cambridge.  Christina said that “regardless of demographic, people were on the same page.”  One key issue was communications.  She said, “Outside the village, there is no high-speed internet.  The digital divide is real and economic opportunities follow the digital divide.”  The library’s contribution toward easing the divide is 24/7 open-access wifi.  Anyone can access the internet from inside or directly outside the library.

The village’s work in connecting people will get a boost from Verizon’s extension of FIOS into the area and the NY governor’s broadband initiative, but it still remains to be seen how many people are reached.

As a general policy, Christina said, “We do everything we can to offer as many free services as we can to enhance people’s life.  We’re big on connecting people.”  To that end, the library lends tablets, Kindles, and laptops, and they’re working on lending mobile hotspots (which don’t yet work everywhere).  They also lend out a metal detector and plans have been floated for next summer to lend a fishing pole.  And the library has partnered with the local farmers’ market to connect the arts and agriculture with a maker tent.  Christina said, “Libraries are more about people now than about the things we’re lending.”

How would you describe Cambridge?
Cambridge is a tight-knit typical rural town.  The beauty of Cambridge is that it’s a safe place.  I have two kids, 13 and nine, and I’ve never once worried walking down the street with them.  The people who see them will know they’re mine.