It has been an eternity since I last posted to this blog.  My fall ended up much busier than I had expected, but I was still thinking that time would open in the late winter and I’d plan a trip to the next Cambridge.  Maybe Maryland or Ohio — both are relatively easy trips, though both still involve either a short flight or a long drive.  Needless to say, my plans to visit new Cambridges are on hold.  But my connection to the towns I’ve already visited continues.

I pick up bits of information about Cambridges, New York, Maine, and Vermont through online resources, and I followed them through snowy winters and into the spring.  Recently I was wondering what it’s like to experience the pandemic in such small towns, with ample space for social distancing, but with limited resources for those who are ill.

Here in Cambridge, MA, the city is cleared of the students who would ordinarily have remained in town through May.  Most stores were required to close, while restaurants have the option to provide take-out or delivery.  The quickly hand-written or printed signs taped to restaurant windows tell us whether they are trying to stay open or have given up until it’s easier to do business. 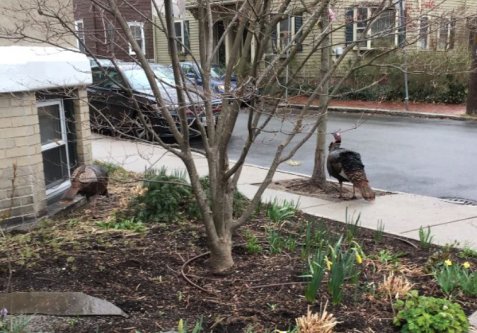 On a cloudy or cold day, the sidewalks are nearly empty and the birds take over.  I’ve found it strangely comforting to see teddy bears in home windows, placed there for children, but an indication to people of all ages that we’re still here together.

The city just opened a shelter for individuals waiting for Covid-19 test results or who are homeless and need a safe place to stay while maintaining distance from others.  The site of the shelter is right next to the city’s high school, and not everyone has welcomed its arrival.  There are plans to use Harvard or MIT classrooms if school reconvenes while the shelter is still in operation.

There’s more I could note about the state of affairs in Cambridge, MA, but I’ll sum it up by saying that there’s a complex collection of responses, as would be expected for a complex city.

With such a dramatic difference among the state totals, I’d expect a variety of responses at the town level.  I’ve tried to get a sense of the changes occurring in those towns.

Cambridge, NY is many miles from the catastrophic outbreak in New York City and the surrounding area, but it still feels the impact of the crisis further south.  Anxiety in the area was clear when surrounding Washington County released a statement that tourists should not be encouraged to travel there.  (The prospect of New York City residents visiting their vacation homes led to quarantine orders from many of the northeast states, including Massachusetts and Vermont.)  Sadly (but not very surprisingly), the June 2020 Balloon Festival has been canceled.  I’ll need to wait until 2021 to see it.  If bookstores could be friends, Porter Square Books in Cambridge, MA and Battenkill Books in NY would be besties.  Like PSB, Battenkill hung on as long as it could, but finally it closed, leaving only Connie to fill online orders.

In Cambridge, Maine, East Outlet Brewing paused in March to consider how it could go on, and it seems to have settled on curbside pick-up.  The Cambridge General Store had already closed for the winter, and I assume the pandemic will delay its reopening.  The town office has remained open for basic services.  It appears there has been progress toward broadband internet for the community — I hope some folks have been able to connect and take advantage of faster internet speed at this time when we rely on it for contact outside our homes.

Finally, Cambridge, Vermont has activated a Covid-19 task force to support the community.  Smuggler’s Notch Ski Resort closed its operations at the end of March, but it’s thinking ahead and announced this week that they can take new reservations for stays or events on or after June 15. The Selectboard continued to meet through the end of March, two weeks later than public meetings were closed in Cambridge, MA.  With town meeting on the calendar for early March 2020, it took place as scheduled.  I’ve exchanged a few email messages with Selectboard member George Putnam and he’s mentioned that it’s an interesting time to be engaged in town governance, which (like so many activities) has turned to online meetings.  He has new blog posts that reference the pandemic.

All the Cambridges, then, are experiencing change.  Do the small Cambridges, which already had relatively few public places where residents gather, feel more or less normal than Cambridge, MA during times like these?  Do residents still feel that everyone knows everyone’s business, as I heard so many times during my visits, or do they feel more isolated?  I worry that many Cambridge, MA small businesses will have trouble coming back when we move to the next (more normal?) phase.  Will that be more or less of a concern for smaller communities?  Time will tell what change the Cambridges will display when the states open up again.

When I started this blog, I had a general (if vague) sense of what I was doing, but I’ve needed to refine my vision in many ways.  One regards the question of which Cambridges to focus on.  It turns out that some of the geographic locations called Cambridge would be more fairly categorized as administrative entities, rather than towns/cities/villages that residents feel part of.  As an example, when I went to New York, I focused on the Village of Cambridge, rather than the Town of Cambridge, which includes several other villages, but doesn’t even include the entire village of Cambridge.

I’m currently lining up my next Cambridge visit, and whichever I go to will be one of the Cambridges that has its own identity.  Figuring out which are which is the first challenge.

I have a chance to make a very quick trip up to Cambridge, Maine tomorrow, so that’s what I’m going to do.  Compared with Cambridge, NY, Cambridge, ME is a small place indeed.  With a population of only 462, it ranks among the lowest population of the Cambridges.  Here are some numbers for you.  (Thanks, again, to Wikipedia.)  I don’t have much of an itinerary this time, but with one trip behind me, I trust that I’ll figure it out.

The only U.S. Cambridge I’ve been to so far is the one in Massachusetts, where I live, but plans are in place to start visiting as many namesake Cambridges as I can.  Some (New York, Maine, Vermont, New Jersey, Maryland) are close enough for quick trips.  Others (Idaho, Oklahoma, Missouri) will take a little more planning.  Meanwhile, I’ll be relying on written interviews to gather information.

Here is what I think is the map of all the towns and cities in the U.S. named Cambridge.