Today, I’m returning to Cambridge, NY, to add to the stories from the village.

In many towns (including Cambridge, MA), local news is covered by a weekly newspaper.  In Cambridge, NY, the paper is the Cambridge Eagle, whose publisher is Ashleigh Morris.  I chatted with Ashleigh toward the end of my visit, by which time I had figured out some of the village’s stories but also had new questions.

To start, Ashleigh helped me understand how such a small village ends up split between two administrative towns.  She said that the towns predate when the village was created in the 1880s by filling in a swamp that separated the east and west sides.  But she certainly didn’t fail to see some pitfalls in the arrangement.  For example, she said that the State of New York removes snow on the main roads (both Main Street and Park Street are state roads), while the village clears the sidewalk.  For some county roads, the county pays the town to plow.  Without that arrangement, town snowplow trucks would drive straight over snowy county roads on their way from town road to town road.

But then we moved on to discuss the Cambridge Eagle itself.  The Eagle focuses its coverage on the towns of Cambridge, White Creek, and Jackson, as well as the surrounding five towns of Hoosick Falls, Salem, Bennington, VT, and Greenwich.  And she described these towns as a network of services that residents of each village might call on.  For example, Cambridge has a bookstore, Greenwich has a Hannaford supermarket, and Salem has many small businesses, so folks get to know their neighboring communities.  “Because we don’t limit ourselves to what’s here, we get to know other villages.” 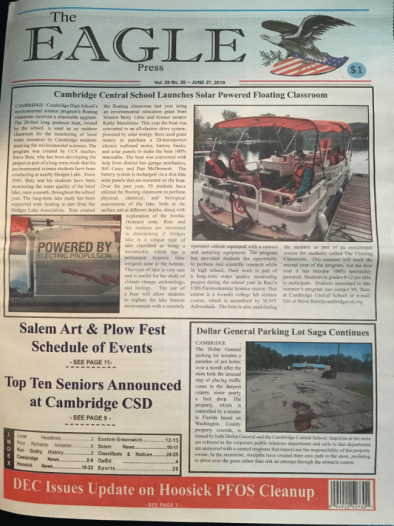 The paper tries to cover all the local government meetings, as well as whatever is going on at the Cambridge Central School.  In addition, from its earliest days, the Eagle has offered church groups a way to get their news out.  In fact, the paper uses Biblical passages to fill extra space in each edition.  At its height, the paper averaged 48 pages per issue.  Now (in a trend facing most newspapers) it tends toward an average of 24.

Ashleigh describes the paper, which she recently bought from her father (who greeted me when I arrived) as a family affair.  There is one reporter, but much of the rest of the work (reporting, editing, printing) is done by family members.  Ashleigh said she has “worked for the paper since I was old enough to read and write.  All of the big stories of my life were news stories.”

These days, with the abundance of news sources out there, Ashleigh told me, “People buy the Eagle to see what their neighbors are doing, what their grandkids are doing, or how the football team has done.  There’s a lot of loyalty to our paper.”  The general area has several other weekly small-town papers, and Albany’s Times Union covers stories of regional interest.  She described some of the challenges of running a local newspaper, such as wanting to go deeper into stories, so that it isn’t always negative news that dominates.

Ashleigh and I also discussed several topics that had come up in other conversations.  She told me the sewer system that is needed to allow greater development would cost $18 million.  She sees infrastructure development as something the village requires “to survive.”

And inevitably our conversation circled around to the Cambridge Central School, which she called the “unifying factor” in the town — “the one single place in this area that draws everyone together.  And we’re really focused on our kids.”

Ashleigh had her years living outside of Cambridge, and she has visited her parents’ long-ago home in Staten Island, so she is clear about her affection for Cambridge.  “This is the community we built.  It doesn’t matter what’s going on outside.”  She sees her school classmates starting to move back with their own families and, with the newspaper to run, it sounds like she’ll be staying there for a while.

When my parents moved here, they needed help.  They had no money and the community came together and helped them.  They got them a fridge and a stove.  And it’s those kind of things that make you stay.  And make you want to have your family here.

So like I said, we did move.  I moved away, my husband lived elsewhere for nine years, and we came back because this is where we wanted our kids to be, and because of the school.  There’s still teachers at the school that I’ve had and my kids now have.  And I think that is probably not easily found anywhere else, and I’m not really interested in looking.  That’s the best way I can describe it, that it’s a family–there’s grandparents and newborn babies and the whole span in between, but you always have a friend, and you always can find somebody who can help you, and you always know somebody.  I think it’s important to know the people on your street, the people teaching your kids, and the people running for office.  Those things are vitally important to the environment I want to raise my kids in.