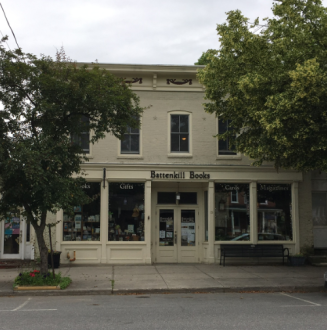 During my visit to Cambridge, NY, I had a chance to visit Battenkill Books, a great independent bookstore right on Main Street.  And there I chatted for quite a while with Connie Brooks, the owner, and Kate Reid, who was handling a large sale.

I asked my standard question and Connie and Kate discussed and answered.

How would you describe Cambridge?
Kate: It’s a place with big ideas and creative energy, surrounded by beautiful agricultural land.  There’s a community theater and education program, so there’s lots of arts and an educated population, along with diversity.

Connie: There’s diversity in education level, for example.  And it’s not a homogeneous community as far as politics.  It’s diverse in that sense.

If I had to describe Cambridge, I would say:  A very special and unique upstate New York village, because we are a village–it’s important to point out not everybody’s a village, but we are–and very community oriented.  I think Cambridge is perfect, but I’m so biased.

Me: Are you both from here?

Kate: I grew up in New York City.

Connie: And I grew up in Massachusetts.  Not terribly far.

When I first moved here, I thought, “I have landed in a Norman Rockwell-esque town.”  There’s a Christmas parade and there are all these trappings of, I don’t know, this image of what a village used to be, but it’s real here.  It’s all really real.  Gosh, it’s beautiful.

Cambridge is really community oriented.  I think that’s why a bookstore can survive in such a small town.  We have a very supportive community.  And, like Kate said, very arts oriented.  It’s amazing how many shows you can go to, how many artists live here.  I think that’s something that continues to surprise newcomers.

At roughly this point a customer joined the conversation.  She noted that she lives in Greenwich (pronounced Green-witch) and comes to Cambridge for the bookstore.  She bought a nice pile of books to make it worth the trip.

Then followed a little further chatter about how lucky the town is to have had a bookstore continuously while so many other towns (including Cambridge, MA) have lost them.  Connie told me, “We took over the existing bookstore, so there’s been a bookstore here for 40 years.  I’ve owned it 10 years.  A decade of the many decades.”

And that, more or less, was our conversation.  Except for a digression while Kate took a call and I was challenged to consider the question offered by Connie’s young son:  How many people in the world are sneezing at any one time?  Now, whenever I sneeze, I think of him and his question.

Then I was off, glad to have met Connie and Kate, two relative newcomers who are meeting the book needs of the area.

One thought on “Cambridge, NY’s gem of a bookstore”